The leader of the Aesir and the god of war 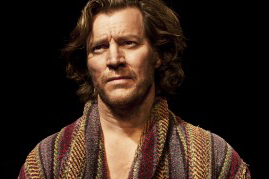 Odin is the undisputed leader of the Aesir, the font of all wisdom and warrior without peer, he who leads his people with vision and counteracts Fate’s every whim. He is a god most renowned for his incredible wisdom, but who is also feared for his mastery of the occult arts and ability to peer into the mysteries of the universe, letting no gain of knowledge pass him by. He is also a god of the battlefield, and when wars rage upon the earth he rides above them, claiming half of all the souls of fallen warriors to be taken with him to Valhalla. Odin is consumed with planning for the prevention of Ragnarok, the battle in which he will die and all he has carefully built will come to naught; he searches ceaselessly for an answer or a way to cheat fate, all the while feeling the breath of the final battle ever hotter on his neck.

When Odin and his brothers Vili and Ve were born, there was no Midgard and no world to speak of. They were afraid of Ymir, the great frost giant and their grandfather, and to ease their fear they fought a mighty battle and defeated him. Between the three of them, they created the world out of Ymir’s body, that there would be a place for men to walk and all things of creation to live, and they likewise created the first man and the first woman. Vili gave them wit and feeling, Ve gave them appearance and senses, and Odin gave them life and souls.

Odin and the Well of Mimir

Beneath the roots of Yggdrasil, the world tree, is the well of Mimir, an ancient being of great knowledge. The waters of the well confer wisdom and learning in unfathomable measure upon those who drink from them; however, it is forbidden to drink of the well without making some form of forfeit. Odin, who desired wisdom to rule all and know all, plucked out his own eye and cast it into the well, and then drank deeply of the waters, gaining great understanding. The knowledge he gained was so intoxicating that he demanded more, however, and he cast a mighty magic before hanging himself from the branches of Yggdrasil. For nine days he hung, pierced by a spear, until he died; when his spell took effect and he was reborn, he was the wisest being in existence, having drunk from the well of wisdom and journeyed to death and back.