The Netjer goddess of mourning and guardian of the dead 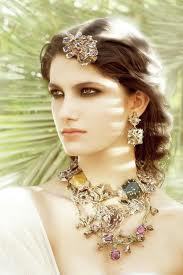 The goddess of mourning, Nephthys is a dark mirror of her twin Isis; barren, bitter and withered as her desert home, she has little in common with the beautiful goddess of life, instead bending her talents toward the aid and succor of the dead. It is said that no dead person, no matter their station or wisdom, can hope to traverse Duat without the protection of Nephthys, who unstintingly guards the deceased as they make their long journey. She is also a healer of great power, second only to Isis, and she bestows her aid to women who call upon her, granting them the children she herself is seldom able to bear. As goddess of the night, she is the mistress of the blackness beyond man’s reach, but acts as a helper and guide in the abyss, unerringly guiding worshipers through the darkness safely and revealing the secrets that it keeps so well-hidden. As Set’s wife, she is faithful and complements his violence with cool reason.

Though Nephthys wanted children of her own, Set was injured and lost one of his testicles in the struggle against Horus, and try as she might she could not interest him in her sexually. At her wits’ end and afraid that he must find Isis more attractive, Nephthys disguised herself cunningly as her sister; however, her disguise was so convincing that Osiris, happening to pass at that time, mistook her for Isis as well and, believing her to be his wife, took her to bed despite her protests. It was not long after that the god Anubis was born, but none among the Netjer have ever been able to truly say whether his father is Nephthys’s true husband, Set, or whether he might be born of her one ill-fated tryst with Osiris.

When Set had killed Osiris, Isis’s wailing was so strident that all the gods came to see what the matter was, including Nephthys. When she saw what had been done to her brother, she made a keening cry of such sorrow that none of the gods had ever heard its like; she had invented mourning, and thereafter it was decreed that all mankind should emulate her custom and mourn their dead after their passing. Once she had recovered, Nephthys helped Isis prepare Osiris’s body for death and served as a fellow mourner in her sister’s grief.

After the birth of Horus, Isis immediately hid lest Set discover her in her weakness and attempt to murder her to prevent her from opposing him. The infant Horus set up a loud clamor, such that Nephthys came to see what the matter was; seeing that there was no one there to take care of him, she set him to her own breast and nursed him as if he were her own. She returned him to his mother when Isis came out of hiding, but forever after was considered at least half mother to Horus despite his actual parentage.